I first discovered Pasha Alpturer’s work through Component Recordings (US) a few years ago (his release “Zero Point” was what convinced me to send demos to this long-standing independent label).

Alpturer’s carefully concocted soundscapes are built on patience and solid technique.  Digging into his catalog revealed a lot more projects than I had expected – and I was happy that he included a discography when Hypnos Audio caught up with him for a recent interview.  While Hypnos Audio generally steers away from gear listing to focus on the cerebral, creative element, Pasha’s method of finding random and powerful constructions from his equipment is paramount to his creative process flow. In this capacity, I can personally relate to him.   – (Dave B.)

Bio:  Pasha Alpturer graduated from the Royal Welsh College of Music and Drama, and currently works as a Music Technology lecturer at Coleg Sir Gar.  Recording under various names, Pasha’s music has both charted on NME and found support from the late John Peel (BBC).   His work has appeared under numerous monikers and on various labels (catalog to follow after interview).

HA: What inspires you to create music?

PA:  What inspires me to make music has changed over the years.  I find listening to music to be very inspirational, I tend to analyse anything I listen to.  It’s something I can’t help or turn off, it’s the main reason I can’t listen to, or make music before going to bed, my brain becomes too active and prevents me from sleeping.   Music that is inspirational to me will have a strong vibe about it, from the hardest Somatic Responses track to the most minimalistic soundscapes of Tim Hecker.   I am often inspired not only from the music itself but where I hear the music; experiencing a vibe or energy from a certain event or party can also drive a creative desire in building a sonic vibe.  One of the most influential nights I remember going to was Dead by Dawn nights in Brixton, this was hosted by the Praxis Label, where you would hear the most extreme types of music played (experimental, drone, speed core and the fastest, weirdest techno available).

HA: I once attended a Praxis breakcore night in the basement of a church in Berlin with Hecate and had the opportunity to visit their shop/cafe. Could you describe your process of starting a new musical project? Have you learned any creative techniques to generate/start projects and would/could you share them if so?

PA:  My approach in starting a new track constantly evolves; I find that I need to develop my workflow in order to keep my tracks from sounding similar.  I also really enjoy exploring new creative techniques; this normally entails experimenting with hardware.  Unlike some artists I never go into the studio with a melody in my head. My tracks always start either from exploring new Eurorack patches or playing around with rhythm patterns from my Beatstep Pro. I like to start my tracks outside the box.  I find that this process is much more inspirational and enjoyable than staring at a computer screen inputting midi data with a mouse.  Also,  I work in a hybrid fashion – most of my sounds are from external sources and then colour (EQ and compressed) on the way into the DAW (Logic X); all of the mixing and editing is then done in Logic. Each of my hardware sequencers are synced to Logic, this is an integral part of my work flow and set up as it allows me to sync and record patterns and sequencers on the fly.

My set up consists of four hardware sequencers, two of these are in the Eurorack format, Eurorack sequencers are the Analogue Solutions SQ 8 and the Xaoc Moskwa Bipolar Roto sequencer.  The other two sequencers are the Korg SQ 1 and the Beatstep Pro.  I love the amount of randomness and probability you can dial into this sequencer.  The way I connect and sync the sequencers is by slaving the Beatstep Pro to Logic; the clock from the Beatstep Pro is connected to my 4ms Quad Clock Divider; this is a great module as it allows me to clock/sync my Eurorack sequencers.  The Korg SQ 1 is slaved to Logic via USB, this sequencer is often used for sequencing the filter on my Moog Little Phatty, it’s also great for sequencing patterns on the Arp Odyssey.  My non- Eurorack external sound sources consist of a Korg Arp Odyssey, Moog Little Phatty, Casio CZ 101, Korg Volca Bass and a Yamaha RX 11 drum machine.   My Eurorack VCO’s are the Make Noise DPO, Honda Piston MK1, A-143-4 Quad VCLFO/VCO and finally two Mutable Instruments Peaks for great sounding analogue drums.  At the heart of the setup is a Mackie 8 bus mixer that has all its 8 buses connected to my RME interface.  I prefer to keep my set up as modular as possible.  I have all synths and all IO’s set up in a patchbay, this gives me the opportunity to easily change signal flow paths, I find this an important part of my creative process as I like to use guitar pedals on synths, this also allows me to easily send drum machines and synths through my Eurorack filters.  Having the outputs from the RME interface allows me to process any audio track from Logic through hardware; I suppose you could refer to it as being an effects loop.  I always tend to experiment by sending the drum bus from Logic through an analogue filter and distortion; this seems to add aggression to the sound.

HA:  I have the Yamaha RX17 model and enjoy those early boxes.  So many electronic musicians get wrapped up in gear, do you find that it hinders your process?

PA:  I have always enjoyed using hardware as part of my workflow, it’s about having fun which in turn fuels my motivation. I like to think that all my equipment is used productively. The only time that hardware hinders my creativity is when I have time constraints, I find softsynths much more accessible under these conditions. My two go to softsynths are NI’s Monark and Logic’s Retro Synth – both great synths. 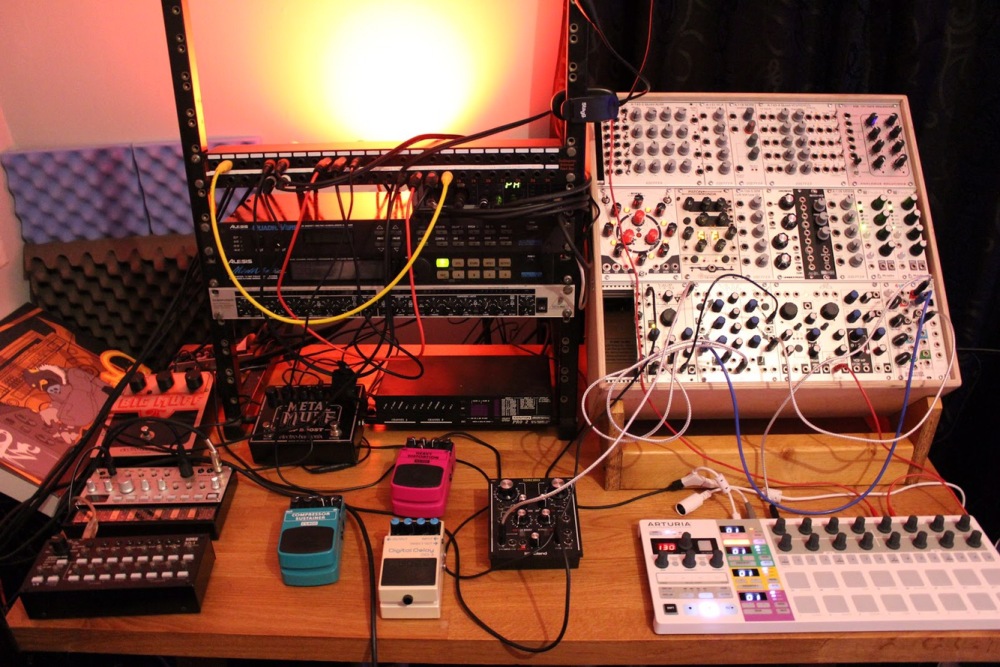 HA:  What do you do at the end of your creative cycle? (e.g., do you immediately move onto the next thing, take a break, etc).

PA:  Since having a family, studio time has had to become much more managed, so when ending one track I’m immediately planning the next.  I would say the only break in the creative process is when finishing an LP; I would take an analytical look back at the creative process and decide on how the next bunch of tracks should sound.

HA:  In addition to electronic music, are you currently working on any other artistic endeavors?

PA:  Photography has always been an interest of mine but at the moment I don’t have the time to fully explore this interest.  I enjoy taking and editing pictures when I get the chance.  A friend of mine Mark Thomas takes great photos and I’ve used some of his pictures for past Alpturer releases.

HA:  If you could give advice to one artist on the creative process, what would it be?

PA:  I think the most important thing is to enjoy the process, be creative, don’t restrict your creativity by sticking to sounds that fit a genre.   Develop your understanding of synthesis and stay away from presets (you can use presets as a starting point) – this way you will create your own sound/style.  Don’t believe every producer on Youtube.  Your first track will not be amazing, it’s a learning curve, your tracks will become better as your production skills develop.

Pasha’s first release was back in 1993, under the name Esoterik –  this album immediately charted in NME. The follow-up EP, recorded under the name Quadralute would find national radio support from John Peel (BBC Radio).

Contact Hypnos Audio at hypnosaudioblog(at)gmail.com View all posts by hypnosaudio